Angels in the Making, dog training in Grand Junction, CO 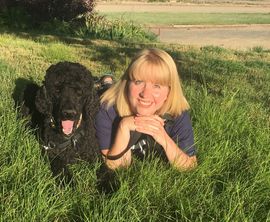 Megan has spent her life with animals. Growing up in Wyoming, she trained, showed, and raised, miniature horses, Boer goats, large horses, and pigs. Dogs have always been a part of her family.

She received a Bachelor’s degree in Biology from the University of Wyoming with the intent of becoming a veterinarian. During college Megan got her own dog and began attending obedience courses. By her senior year it became clear that her passion was not in medicine, but in training, so she attended Bergin University of Canine Studies in California where she received her Master’s degree in Canine Life Sciences and Certificate in Service Dog Training in July 2017. This program allowed Megan to work with a variety of dogs learning basic and advanced skills, as well as work with dogs who had behavior struggles. The courses included canine cognition, genetics, behavior modification, and dog law, among other topics. While working towards her advanced degree Megan worked in Life Skills Special Education with high school students.

In March 2018 Megan became a certified Pro Trainer through AbsoluteDogs. This is where Teri and Megan's paths crossed. Megan has a love of reading and is constantly working to build her skills and knowledge in dog training and behavior. Megan joined the Angels in the Making team in August 2018!